Many of you may have heard me refer to my ‘American mum’ on my various social media platforms. Debi Pedersen is the real-life mum of Stacey, a very dear friend of mine, and somebody who I’ve grown close to in the 8 years I’ve known her.  She and her husband Jim were kind enough to put us up when my partner and I embarked on a tour of California with Stacey, back in 2008.  We had such a great time and vowed that we would keep in touch.  In the years that followed, we’ve met up in London and they have stayed with us here in Cardiff when they visited to celebrate Stacey’s 30th birthday. They really are awesome people and have done so much to support my growth as a quilter that it was only natural I’d want to repay them in the best way I know how.

Now, I’ve been known to use the Pedersen’s residence as my own personal post office. If I make a purchase or partake in a de-stash and the seller won’t ship internationally then Debi kindly let’s me have fabric and other notions sent to her for storage.  I’ve lost count of the times that I’ve done this and I inevitably end up with a towering pile of purchases waiting to be collected. I always envisage that one day I’d return to CA and collect it all, but more often than not Debi surprises me and has it posted out.  So thoughtful!  On one of these occasions she included in the package some blueberry-themed fabric she had picked up for herself at a local store, asking if I might be able to make something for her with it. Shamefully, that was about 2 years ago.  Life got in the way and the fabric fell ever-deeper into the stash.  It took a house move and a load of unpacking for it to resurface and prompt me to get a move on. The heart of Debi’s house is her kitchen.  Both her and Jim and amazing cooks and she has such a passion for all things culinary. With that in mind, I decided that a table runner, rather than a quilt, would make for a more fitting gift. Refusing to keep her waiting any longer, I liased with Stacey to get some secret table measurements and set about making!

The resulting runner makes me smile, not only because I know it’s going to a deserving person, but also beacuse I had such fun making it. As always, I indulged in the fabric pull. Using the blueberry fabrics that Debi had sent as my inspiration, I mixed them with some stash favourites, including some new L’s Modern Garden by Lecien, various Carolyn Friedlander prints and some coordinating Kona solids. The background is Essex linen in steel. I kept the construction simple, making a load of stitch and flip blocks before trimming them down to squares using my trusty Sizzix Big Shot.  Then it was a case of arranging them into a long lightening bolt shape and sewing them all together.  For the quilting, wavy organic lines compliment the angular piecing. I used Aurfil 50wt against an amazing First of Infinity print for the backing.  It had been waiting patiently in the stash for its moment to shine and I think that it has found it! With a text print from the Architextures collection, the runner was done. 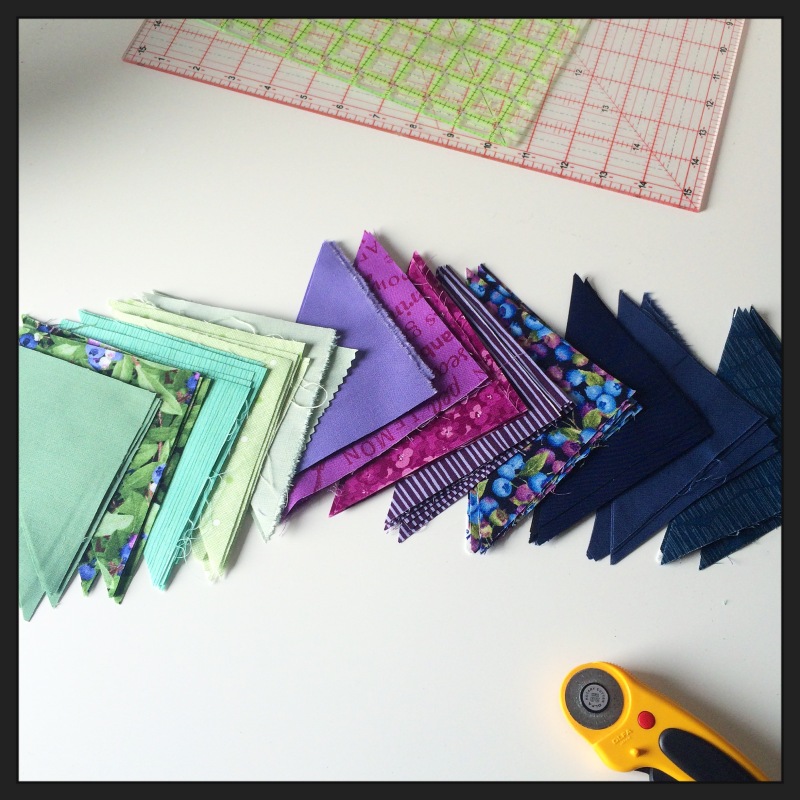 In the weeks since completion, the runner has crossed the Atlantic and arrived safely in the States. I’m pleased to report that Debi and Jim love it and I’m so glad that I’ve finally been able to thank them both in some small way.  I love that a small piece of me is in their home and their hearts and hope that they’ll continue to love and use it for genrations to come.